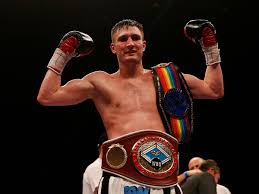 Tommy Langford’s employer Orange Electrical Contractors Ltd has provided the super-middleweight with a financial boost to power his preparation as he gets ready to face unbeaten Lerrone Richards for the vacant Commonwealth and WBO International super-middleweight titles on April 27 at the SSE Arena, Wembley, live on BT Sport.

Orange Electrical Contractors Ltd is an electrical contracting company based in Birmingham – where Langford resides – specialising in design and build within all sectors.

The former British, Commonwealth and WBO Inter-Continental middleweight champion said, “Basically I cannot stress how great Orange have been with firstly employing me and giving me the chance and now to be supporting me by the way of sponsorship whilst allowing me the last couple of weeks off to fully focus and prepare.

“Having the full support and backing of your employer these days is extremely hard to find and I’m very fortunate that I landed a job with Orange.”

Langford’s decision to re-enter the workplace after living the life of a full-time professional boxer was following back-to-back defeats in British championship fights with local rival Jason Welborn.

He explained, “Back before Christmas I was in a sticky patch, financially. I needed work badly and for the life of me I couldn’t get anyone to give me the chance, given the past 5-6 years I’ve been a full-time pro.

“I had managed to pick up some electrical qualifications, which I thought would stand me in good stead getting a job with an electrical firm, but the fact is experience is everything and I had very little for an employer to bank on. Thankfully, Tom and Jay, who own Orange Electrical Contractors, are big boxing fans so I think that helped me get my foot in the door for a job.

“They ended up employing me, which is great, and they realise the significance of this fight for me and sponsored me to help with my training camp, so I really am extremely grateful for all their support, and I look forward to rocking up on site on Monday April 29th with two nice new shiny belts!”

For any domestic, residential or commercial electrical services required, please contact Orange: Enquiries@orangeelectricalcontractors.co.uk or on 0121 726 9110

Any cookies that may not be particularly necessary for the website to function and is used specifically to collect user personal data via analytics, ads, other embedded contents are termed as non-necessary cookies. It is mandatory to procure user consent prior to running these cookies on your website.